Transatlantic Transfers: the Italian presence in post-war America (TT) will shift the research agenda from charting the cultural Americanization of Italy to retrieving context-specific instances of the Italianization of style in the U.S.A., and from a national/international to a transnational/global framing of the history of relations between Italy and the U.S.A.

The Research is designed to trace the emergence, manifestations, and meanings of an Italian style [the so called “made in Italy”] - distinctly “Italian” and “modern” - that originated in Italy and became internationally known in the 1950s and 1960s, but whose visibility has depended on a complex international and intercultural infrastructure for cultural, political, and economic exchange between Italy and the U.S.A.

It is also designed to investigate how specific Italian works of art, literature, film, design, fashion, visual culture, architecture, food and popular culture were introduced to American audiences (through events, exhibitions, book reviews, advertisements, festivals), between 1949 and 1972, and how a recognizable modern style associated to Italian iconographic people (writers, artists, designers, intellectuals and movie stars) was appropriated as a marker of distinction in the identity formation of an upward mobile, cosmopolitan, affluent American middle class.

Transnational, interdisciplinary and interculturalist research methods are necessary to detect and study the signifiers of a modern Italian and cosmopolitan style and their circulation. These involve qualitative approaches in cultural and historical inquiries of visual, oral, and written sources and discourse analysis, as well as the analysis of the links between the circulation of printed material, translations, editorial and production projects, reviews, and the individuals and social groups that made them and their circulation possible, as well as the study of their financial and material conditions of circulation.

The themes of research will be investigated with a variety of conceptual and methodological tools, based on the interaction of a wide range of sources: written, oral, visual, recorded, and displayed material, design and architectural projects and the history of their making, editorial contracts and correspondence, manuscripts.
Given the TT strongly multidisciplinary and interdisciplinary character, coherently involving scholars in different fields of the social sciences and humanities, the research project will coalesce the theoretical and methodological apparatus of the different fields and their scientific literatures in a single analytical framework..

The research will then explore the subject matter of the transatlantic circulation of Italian cultures in the direction of the U.S.A. from three different angles and operative hypothesis: 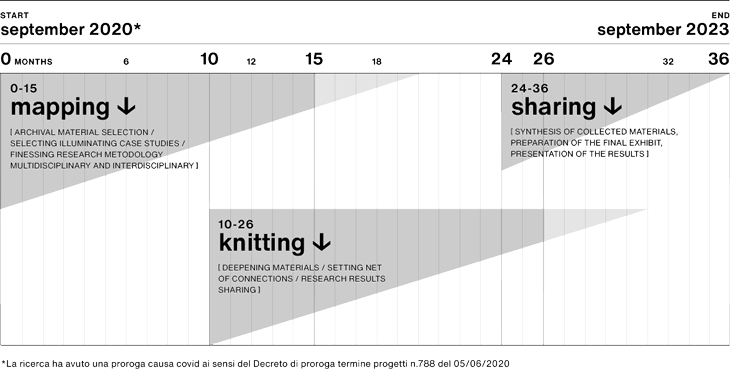 The first stage will therefore be dedicated to identifying the archival material most relevant to research, selecting illuminating case studies, and finessing the research methodology, always in a multidisciplinary and interdisciplinary frame.
The shaping of a multi-disciplinary and inter-disciplinary frame on analysis and effective mode of collaborative operation among the Research Units is to be considered itself an important by product of the project. Research on primary sources will be pursued partly in Italy, and partly in the U.S.A.

In the second stage, materials gathered will be continuously deepened and a net of connections within them will be set. With this aim research results will be circulated and discussed in rotating seminars and symposia organized at every stage of the project by the four Research Units, to which leading international scholars in the fields of contemporary social and cultural history, cultural, film, architecture and design studies will be invited to participate. They will also act as advisors in the preparation of the final exhibit and third-party evaluators of the overall results of the research.

The final stage will be dedicated to the synthesis of collected materials, the publication of the two research volumes, the preparation of the final exhibit and the presentation of the results in the course of an international interdisciplinary conference. The aim will be to define in the plainer way contents of the final books and of the exhibition, to guarantee the wider appeal to the contents of the TT.

The project will be organized in 4 multidisciplinary and interdisciplinary research fields, developed by the four partners, depending on their expertise.

This research field will study the reception of cultural exports in urban America. Recent contributions have stressed that the “Transatlantic Century,” far from being a one-sided story of triumphant Americanization, witnessed a multidirectional movement of ideas, goods, and individuals. The impact of Italian style on urban America is a significant aspect of these transatlantic flows.
It will focus on the way in which Italian architecture, art, cinema, design and fashion, and food permeated U.S.A. urban landscape, highlighting the connections between the spheres of production and the market, and providing an overview of the role played by Italian marketers of “Made in Italy” goods and lifestyles (Italian state and non-state actors and the Italian-American community) and the role of receiving U.S.A. consumer institutions.

Modern Italian Cool
Cultural networking and the circulation of Italian literary, artistic, and cultural icons between Italy and United States

This research field will investigate the formal and informal venues, institutions, and channels that favoured the circulation of modern(ist) Italian art, literature, and music culture in the U.S.A., in order to both shed historical light on an understudied segment of twentieth-century transatlantic cultural history, and to philologically reconstruct cases of direct and indirect influence of Italian culture on American letters and cultural taste. Our hypothesis is that Italian literary and artistic networks have been more influential on American culture than has so far been acknowledged, and that precisely the late modernist recirculation in translation of Italian literature through American culture was crucial to the canonization of an internationally recognizable to modern(ist) Italian canon. It will investigate transatlantic exchanges and networks in Postwar visual arts, with a particular focus on reception of Postminimalism and Arte Povera on both sides of the Atlantic.

This research field will reconstruct the forms through which Italian cinema has contributed to the creation of a new imagery and cosmopolitan urban style in American cinema, with particular emphasis on the relationships between film, lifestyles, emotional regimes and structures of feeling. The period under review is characterized by the decline of the Studio System, the rise of new forms of art cinema, and the spread of innovative modes of production. It will investigate the influence and dissemination of images and signs of Italy and Italian style in four production areas: Hollywood mainstream cinema; TV productions; Independent cinema; Experimental/underground cinema and video art. The research will focus the functions and legacies of Italian visual culture in the American audiovisual production, taking into account films and cinematic trends whose circulation in the U.S. is documentable.

Mapping the Transfer
The Italian presence in American design, architecture and urbanism

Aimed at reassessing a narrative mainly based on the American involvement in Italian architecture, housing programs and planning since WWII, this research field will re-examine the nature of this multifaceted transatlantic exchange, tracing a first overview of the presence of Italian design and fashion, architecture and urbanism in both specialist and popular culture in the United States. It will focus on the transfer of Italian architectural culture and technical knowledge in design and planning to explore their impact at the local level; map the main venues and circumstances of exchange (travels, exhibits, conferences, publications); and identify the main actors of the process and their specific agendas.
In regard to fashion, it will focus not only on the relation between Italian fashion and the movie industry and American movie stars but also on the reasons and impacts of the success of Italian fashion within the American retailing system that, thanks to the positive acceptance from department stores and buyers, helped the diffusion of Italian fashion and the creation and consolidation of an “Italian style” for the use of American high-end classes 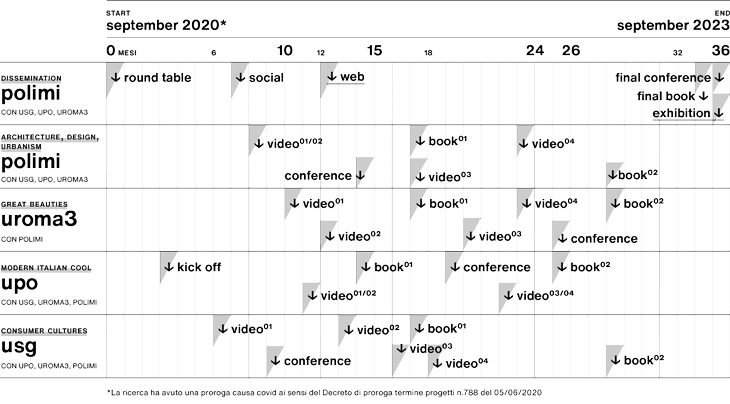 The duration of TT will be articulated by a set of conferences, one per University taking part to the research, mainly addressed to a public of scholars, with the main aim to share knowledge within the research group and to grant the comparability of results through different areas.

The exhibition will be a narrative path divided into different thematic environments, transversal to the different research areas, able to reconstruct the influence of Italian culture through design, literature, consumer culture, cinema and all those events that have contributed to the formation of "Made in Italy" in the American collective imagination.
The structure of the exhibition will consist of a succession of thematic stations that will highlight different cultural areas starting from two categories: the places of everyday American life in which it was conveyed the impact of Italian culture and the events and milestones that have led to its diffusion and affirmation.